The mobile payment industry is rapidly changing as both new players and established providers step up their game to win market share. The time is right. With retailers readying their POS lanes for EMV compliancy by refreshing their payment terminals to read chip cards many will likely add NFC capability so they can accept payments from multiple mobile wallet providers from any geographic location, the option for contactless payments in Australia has now became a reality too! Whereas, before hand this scheme was held off due to security implications!

Within the past 2 months alone:

It’s not easy keeping track of these changes so we thought this is a good time to highlight the major providers and the impact of their recent deals on their mobile payment solutions.

WATCH: Chase video showing the differences at the POS when paying via mag stripe, chip, contactless (tap-and-pay) and mobile wallet.

Boston Retail Partners (BRP) estimates that 38% of large retailers will be supporting Apple Pay by the end of 2015, and 56% by the end of 2017 making it the most widely used mobile payments platform among the big merchants.

Apple Pay mobile payments on the Apple Watch is a big selling point – in particular for users of the iPhone 5, iPhone 5c and iPhone 5s whose devices do not natively support Apple Pay due to the lack of NFC chips.

Simply hold the Watch near an NFC-enabled payment terminal and double-clicking the side button to initiate the payment. A “gentle pulse and tone” lets you know your payment has been processed. What’s more, you don’t even need to have your iPhone with you for Apple Pay to work on the Watch.

Multiple cards can be loaded with each being assigned a unique device account number that is encrypted and stored on a dedicated chip. The dedicated device number acts like a token and is transmitted during a transaction in place of credit or debit card data. Your banking details never leave the Apple Watch nor does Apple store the data on their servers. An added security feature is Apple Pay will only work when the Watch is in contact with the wearer’s wrist. And, like the iPhone, if the Apple Watch is lost or stolen, cards can be removed from Apple Pay.

Apple Pay will now be accepted at 200,000 vending machines and self-service terminals.

In a recent interview with pymnts.com, USA Technologies CEO Stephen P. Herbert commented “We’ve been taking Apple Pay transactions for some time, and one of the things we’ve learned that our merchant customers are very interested in is the fact that a mobile payment transaction, on average, has a ticket value that’s 15 percent greater than a typical credit or debit transaction. That’s a hard piece of data that we’re putting in front of customers now. In addition to the other benefits that come with things like Apple Pay, that 15 percent incremental bump for a mobile-based purchase is an encouraging piece of data.”

Apple Pay itself has not been breached. Rather fraudsters are using card data gathered from recent breaches (including Home Depot and Target) to create Apple Pay accounts by taking advantage of some individual banks’ processes for card verification which ask for information that can be fairly easy to attain (last four digits of user’s social security number).

eBay’s PayPal is currently the leader in mobile wallets with 13% of retailers supporting its platform. To keep up with the huge success of Apple Pay it will need to continue to improve its acceptance at retail POS. (There are reports that eBay may be spinning off PayPal later this year).

Earlier this month, PayPal announced its acquisition of mobile wallet developer, Paydiant, whose clients include MCX. The acquisition is an example of bimodal IT – a concept defined by Gartner where the IT organization includes within its framework the equivalent of a start-up to remain innovative and competitive. It’s a model that is gaining acceptance with large companies that need to achieve differentiation and adapt to an increasingly digital customer base by acquiring startups outside a company’s industry vertical. 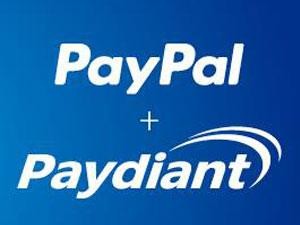 Paydiant is a ‘white label’ payment platform consisting of a development toolkit that handles all the complexities of creating a wallet and integrates it with the retailer’s point-of-sale ecosystem. Their technology is the reason why CurrentC, and now PayPal, can run on existing smartphones, POS and payment terminals. The application payment interface (API) is easy to implement enabling the POS to present a QR Code for the smartphone to scan and initiate the payment transfer.

The new capability means that PayPal merchants can accept mobile payments from Google Wallet and Apple Pay. Plans are to rollout the device in the UK and Australia this summer, then later in 2015 to the US. It’s estimated the reader will be priced in the $100 to $200 range. This will allow for smaller merchants to go out and get themselves a website by SMAR7 Apps and get online as well as in stores! This new scheme will bring them in new business!

Android Pay will use tokenization, NFC and potentially fingerprint scanner. It’s expected to have advantage over Apple Pay as Android currently has a 52% share of the US market as well as dominant share in other markets including the UK (51%), China (73%) and Mexico (85%).

A recent article by Pymnts.com estimates that Samsung Pay will work on 90% of the 15 million payment terminals installed in the US. In contrast, because it uses NFC technology only, Apple Pay is currently compatible with an estimated 220,000 payment terminals.

Samsung’s recent acquisition of LoopPay, an established mobile payment system, accelerates its mobile commerce efforts beyond mobile payments creating a comprehensive mobile wallet that doesn’t require merchants or consumers to change their behavior at a faster pace than they are will to accept.

LoopPay currently works using a standalone fob or a CardCase, which incorporates the payment technology into a protective case designed for use with smartphones. The case communicates wirelessly with existing NFC payment terminals. Samsung will build the LoopPay technology into its next model smartphone.

No news of late regarding the availability of CurrentC. Although, Walmart – one of the founding members in the MCX consortium – recently acknowledged it may be open to accepting Apple Pay as a mobile payment option.

Neiman’s iPhone app will include its own mobile wallet developed by Capital One for its Neiman Marcus and Bergdorf Goodman credit cards. The Neiman app opens a QR code that the consumer holds in front of the scanner at the point-of-sale – the same method as that used by Starbucks and Subway in their apps as well as MCX’s CurrentC.

As retailers prepare for EMV they will continue to replace their payment terminals with newer technologies that can include NFC. Once most merchants are ready to accept a variety of mobile payment solutions, consumer preferences and the dominant mobile wallet providers will emerge.

Thoughts or comments? We’d love to hear from you. Email us at info@mainstreetinc.net

Our fall 2014 blog series on Payments

Apple Pay Gets More Bank Support, But It Still Needs A Lot More Stores To Succeed

Samsung Wants To Build LoopPay Into Devices, And To Build A Holistic Mobile Wallet

Apple Pay will be embraced by 38% of major retailers by end of 2015, study claims

Apple Pay by the numbers