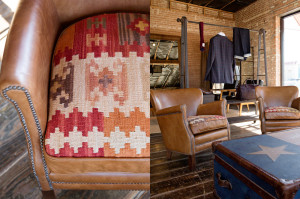 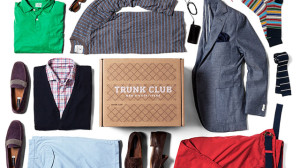 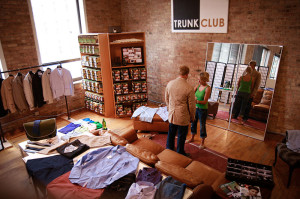 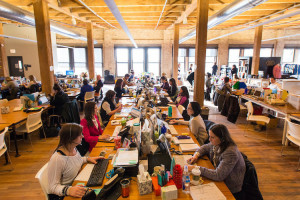 Dallas is enjoying the revitalization of menswear with the opening of three high profile retail stores – Trunk Club, Bonobos and custom clothier Knot Standard – all situated within a 1-mile span in the Knox-Henderson district.  Trunk Club in particular caught my attention because the concept is so innovative.

‘You get to drink while someone shops for you’ was what one of my neighbors told me last November when I asked about the newly opened Trunk Club.  That’s what you may expect from a ‘golf shirt and khakis’ but it’s only a sliver of what happens at Trunk Club.

After Nordstrom announced last week that it was buying Trunk Club, I decided to do some research and visit the Dallas store myself.  Ever astute in its digital investments — including BaubleBar, Bonobos and Hautelook — Nordstrom seems to have picked another winner.

The concept is smart.

Trunk Club built its business on connecting men looking for styling advice with its extensive roster of personal shoppers.  It recognizes that within its target demographic of urban professionals, many men want to look good but either don’t like to shop or don’t have the time.  Their solution is hand-selected clothing for men based on their style, fit and size preferences.  Customers sign-up for free membership and complete their individual profiles.  Next Trunk Club’s stylists speak with interested members over the phone to learn more about their preferences.  The stylist then hand-selects a box full of items and ships the ‘trunk’ to the customers who are only charged for those items they don’t return within 10 days.

In addition to Dallas, Trunk Club has showrooms in Washington, Chicago and most recently Los Angeles.  Plans are to open a New York City location in 2015.  These showrooms set the gold standard for an omni-channel shopping experience.

Chicago-based Trunk Club was founded in 2009.  Although it has enjoyed significant growth since its inception, it lacked an inventory of branded items.  By joining forces with Nordstrom, it will have access to over 100 brands as well as the larger company’s supply chains and infrastructure that will help prevent out-of-stocks.  Trunk Club shoppers will also have access to Nordstrom’s tailors to make adjustments to their clothes.  Plus, Trunk Club’s monthly boxes represent an attractive new channel for Nordstrom to sell its own private label merchandise.

Growth in the menswear segment

As with many of today’s retailers, Nordstrom knows that the men’s fashion market is underserved and recognizes the segment as green space.  Many large retailers are enhancing the segment’s square footage in its stores as well as introducing luxury men’s product lines.  Other news in the segment includes:

As for my Trunk Club experience — upon entering the Dallas showroom, I was greeted at the front reception area by Linda who was a great ambassador.  When I explained I wanted to learn more about their business she gladly took me around, told me all about the services they provide and how this location within only a few months had grown from 10 to 50+ stylists (in fact they may be outgrowing the current location).  The showroom bustled with activity from the stylists serving clients in person to the stylists serving clients on the phone and online.  It reminded me of the sense of community that to-date very few retailers other than Apple have been able to create.

I left trunk Club Dallas with plans to return soon with my ‘golf shirt and khakis’ guy who doesn’t like to shop for clothing.  I’m confident that we’ll be leaving with some new wardrobe pieces that he’ll look great in plus he’ll enjoy the shopping experience.

And it’s not just about having a drink while someone shops for you.