Can you reinvent an iconic department store? 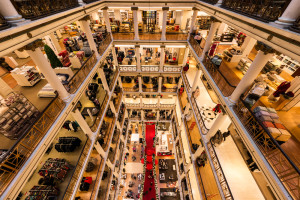 You sure can.  Just checkout Macy’s and Nordstrom, a few of the traditional merchants committed to continuously evolving their businesses to enrich the shopping experience regardless of the channel.  They know shoppers are tired of little differentiation between various banners except the name on the storefront.  That what worked 20 years ago, doesn’t work today.

Traditional department stores are unique.  Not only are they huge, multi-level properties (Macy’s averages 179,000 sq. ft. per store) with a vast array and large number of technology devices (including an average of 50 POS stations per store), they have the added distinction of being the anchor in shopping malls — many of which are either in decline or closing.

So what sets apart a great department store from one that’s not so great?

Retail guru Robin Lewis recently attributed Macy’s strength to the strategic vision and methodical, complex tactical implementation of CEO Terry Lundgren and his ‘five-star’ team.  Under Lundgren’s leadership, the 34th Street flagship has transitioned to a shopper’s dream of a boutique-like shopping environment offering an exceptional audio-visual experience and featuring frequent special events.  It’s anticipated that Macy’s will re-energize other stores to bring the excitement and passion back to brick-and-mortar by creating a mini-mall full of go-to events, cafes/restaurants and branded lifestyle shops leased by the respective brands.

Macy’s recently announced that its CapEx budget will increase to $1 billion annually with more of these dollars dedicated to digital and store technology including in-store tablets.

Forbes reports that Nordstrom remains focused on its defining organizational characteristic, service.  They are harnessing the power of technology to drive growth and a flawless customer experience regardless of the channel.  Nordstrom continues to invest heavily in online technology and plans to do so for the next several years.  Part of this investment is to ensure full-line department store customers receive information quickly about new store events and specials — of particular importance for HauteLook and The Rack shoppers where certain items can sellout quickly.

Fall 2014 marks Nordstrom’s eagerly awaited arrival in Canada with the opening of its 1st full-line department store in Calgary.

HBC plans to open its 1st Saks stores in the Toronto area in 2015.

With annual sales of $27.4 billion, TJX is a close second to leader Macy’s at $27.9 billion in annual sales despite the fact that Macy’s has almost 40% more square footage (source Buzzfeed).

What does TJX do right?

TJX continues to see growth opportunities internationally and in the US where it anticipates eventual expansion to 3000 Marshalls and T.J. Maxx stores in the US.  Clearly TJX is a company that is benefitting from the post-recession changes to more deal-based shopping behavior and discounted designer fashions.

Not so great:  Kohl’s

Like other mid-level department stores, Kohl’s gets squeezed at the high-end by Macy’s and low end by discounters like WalMart.  Unlike TJX which carries a wide assortment of discounted designer and private-label merchandise, Kohl’s carries mostly private label brands many of which are tired and unlikely to create excitement in the store or entice shoppers.  Although private-label carries a higher margin, in an effort to increase sales Kohl’s recently announced its plan to rebalance its offerings by adding more national brands.

Not so great:  Sears

The 2004 combination of 2 losing retail brands – Sears and K-Mart – made little sense to many in the industry.  Ten years in, we see a behemoth spiraling out of control.  The first quarter of this year, Sears closed 80 stores and spun off Lands’End.  In its ongoing attempts to streamline its business by shedding operations and closing stores, Sears is now exploring the sale of its 51% interest in Sears Canada as well as a possible spin-off of the auto-centers.  Further store closures will no doubt be part of this strategy.

For the best insights into Sears, follow 2 of its former senior executives – Steven Dennis and Mark Cohen – both of whom exited the company in the 2003/2004 timeframe.  These men are fierce in their criticisms of Sears and its Chairman/CEO, Edward Lampert.  Within the past few weeks, Mr. Dennis listed five reasons why the company should ‘stop the charade and embrace the inevitable’ and Mr. Cohen has commented the company doesn’t have a long-term future and has only been able to stay afloat through asset sales.